The new singer signed up by Moises Vivanco. Many believe she will replace Yma Sumac following the divorce granted a short time ago. The new "American nightingale" is traveling with many hopes and dreams and believes she will be a success. After the tour in Greece it will become clear whether or not the young star's dreams have come true. 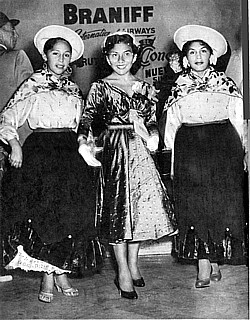 A 20-year old unknown singer from Lima has been signed up by composer Moises Vivanco to perform with Yma Sumac on tour in Greece.

Will Yma Sumac be replaced by the new singer signed up by Vivanco?

Judith Acuña, a 20-year old brunette from Lima never thought she would become a star even though she was happy to be called one (Wara Wara is the Aymara word for little star). When she received five cables from Moises Vivanco, composer and ex-husband of Yma Sumac, inviting her to take part in his show, Judith discussed the matter with her parents and within a week decided to make her bid for stardom.

The new member of Moises Vivanco's group said that her love of singing began when she was 5 years old and the first thing she sang was the national anthem. She was given the name Wara Wara by the Lima-based journalist Guido Monteverde, who also gave her much encouragement when she was starting out. This young lady, who has an excellent voice, has met with considerable success wherever she appears and before long she was offered contracts to appear on various radio programmes.

Music would appear to be in her blood. Her father, Samuel Acuña, works in ceramics but in his spare time plays guitar. Her mother, Felicita Pichelingue, had some success as a singer in her youth. As Judith loved singing, they made a number of sacrifices so that she could study in the national conservatory in Lima. Wara Wara's family is not a well-off one; they do not have many comforts but they are happy.

A short while before leaving for New York to join up with Moises Vivanco and then leave immediately for Greece, Judith told us:

I don't know how things will turn out. I'm not really nervous but this is the first time I'll be leaving my country - and I don't speak English.

- How did Moises Vivanco come to hear about you?

One of his sisters, Teresa Vivanco, sent him some of my recordings and it seems he liked them.

She said that she only knew Vivanco from his music, and thought that Yma Sumac was a wonderful singer.

As I understand it, Miss Sumac will be singing separately. Mr Vivanco is intending us to be in the same show but not performing together.

Wara Wara has a repertoire of 150 folk songs (all of them from Peru), some of which are sung in Quechua. However Judith loves both classical and folk music and can sing all styles of native Latin American music. 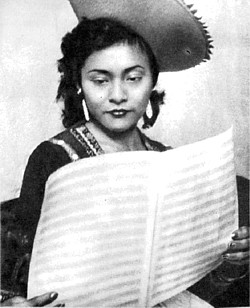 While packing her bags for the air trip, she looks around at the walls of the modest apartment in which she lives with her parents and says:

Her initial contract is for $100 per week, plus return flight and all expenses paid.

The only thing I want is to be a success, Judith said, even if it means sacrificing a lot.

Once the tour to Greece is over (it is to last for about 2 months), Vivanco will arrange for Wara Wara to live in the United States. Meanwhile; all her countrymen have high hopes. Will Judith soon become another Yma Sumac?

Judith has the last word. Although that's not really true. What passes her lips is the first song.