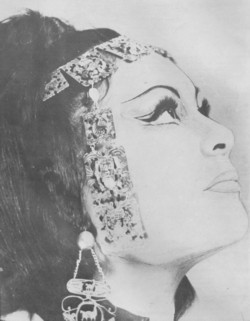 Singing is an extraordinary art form that touches your innermost feelings and is able to transport the soul to hitherto undiscovered places. Melodiousness, a human quality with divine attributes, can be heard in the voices of a few privileged individuals who have been given the talent of Orpheus and are able to communicate it to us with the emotion of all its various forms. When Orpheus, the son of Apollo and Calliope sang, he was able to calm the wild beasts, the birds flocked around him to listen; the flowers opened and even the rocks slowly moved their inert matter.

The great singers have earned their place in history and deserve our admiration, but when we realize that the voice of a young and attractive Peruvian has transcended our national frontiers, we can feel duly proud. Judith Acuña, a brilliant coloratura soprano; has taken the sun of Incan Peru to the frozen lands of Russia. She has shone on Soviet stages, bringing triumph to our country through its folklore.

She began singing when she was five years old and first appeared in the Maruja Venegas's Children's Radio Club. It was here that many world-famous artists began and Judith stepped up to the microphone to amaze everyone with her vocal abilities.

Her mother, who has made a great contribution to her daughter's artistry, learnt the songs and then taught them to her, leading to her first musical success on Radio Victoria. And this success continued with her many appearances accompanied by her husband, Alberto Luque, part of the Trío Perú.

She has just returned from the Soviet Union where she has completed a very rewarding contract and has performed in a great number of theaters, from the Bolshoi to the most remote towns. She is due to return in April for another six months.

Under the name of Wara Wara (Little Star) she has toured Europe, Asia, North America and part of Africa. In all these wonderful exotic places with their different languages and customs she has found success through her artistry. In her latest tour she was billed as "Bapa Bapa" with her exotic music from "nepy" (Perú).

One of the places she visited most was the former Winter Palace of Czar Peter I; which has four hundred rooms and is now a museum. The works of art on display there are among the very finest and there are so many of them that if you spent a minute looking at each one it would take you eight years to see them all.

When asked if she had any amusing story to tell, Wara Wara said that when they learned that a thousand pictures were on sale of Leonardo da Vinci's Madonna Litta, copied from the original held in the museum, she and her husband queued up to buy two of them. When they had got them, it occurred to them that they should have bought others to give as gifts to their friends, so they went straight back but they had sold out. The pictures had been snapped up in minutes, so great is the thirst for culture in Russia.

Intima, the Peruvian woman's magazine, was keen to learn about the life of women in this far-off continent. Judith said that they were full of enthusiasm, happy and spoke with such simplicity and ease which came from their extreme friendliness. 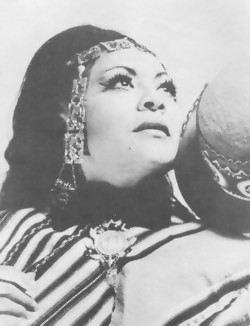 - Do Russian women dress differently from the way we do here?

- The very young women wear mini-skirts, the older ones less so, but their skirts are not too long. They always wear head scarves, boots and wrap up well. The temperature was -20, but they didn't think it was too cold, since they are able to withstand up to -40.

- Given that there is so much interest for the theater, what do they wear when they go to concert halls?

- They arrive in fur coats, head scarves and boots, but they go to the cloakroom, leave their bulky clothes there and remain in their elegant low-cut dresses, which they display proudly during the intermission. It's almost obligatory to get something to eat before the second half.

- And are their hairstyles and the make-up similar to what we see here?

- The hairstyles are very elaborate with curls. There's no make-up in Russia. They are not familiar with eyeliner and they were very interested in mascara. It is only artists who make up for their performance and they take it off as soon as the show is over.

- Do they have any special type of cream to protect them from that very harsh climate?

- They have a very special type of massage using hailstones. They lift up their faces to catch the hailstones as they fall; this acts as a moisturiser and toner. Since I was not used to the cold and the force with which these hailstones hit you, I wasn't able to try this out myself.

- Is there any particular Peruvian song which might be their favorite?

- They are fond of very many, but especially, I would say, "Amor Indio", "Las Virgenes del Sol" and "La Balada del Indio".

- Do they know much about far-off Peru in Russia?

- Of course. There are schools where they teach Spanish, there is a great deal of interest in Peruvian music and there is even a radio station broadcasting in Quechua. Because of their great interest in our music, we brought back with us many Russian songs that we are going to translate into Spanish and perform in our next tour, in response to a request they made on many occasions.

- The audience is very demanding and you have to please those who come to see you perform. An artist owes this to the audience and so you have to try to get better and better. Each morning, I practice my scales and when I perform a song; I try to vary it, never singing it in the same way twice. I love to improvise and fortunately these unrehearsed variations have always worked. When necessary, I project my voice, since I studied in the National Musical Conservatory, in particular singing and theory, but I can also rely on my own innate ability, which has mapped out my artistic career.

-Did anything strike you about the status of Russian women?

- Their feeling of fulfillment, honesty and lack of malice. Lying is alien to them and their honesty is the biggest proof of their civility. There is no illiteracy in Russia and women can do all sorts of jobs. It's not unusual to see them in the streets directing the traffic.

- Wara Wara, I would like you to send a message to Peruvian women

- I believe in the struggle for equality and in work. I think that Peruvian women today must be productive and look for work in whatever field they choose. The ideal situation would be for them to be able to work alongside their husband, shoulder to shoulder, together in order to provide a better future for their children. In my own case, my husband and I are very close, we travel together and our life is geared to art. All this work, which sometimes involves sacrifices, we do it thinking of what it can bring for our little daughter who is nine years old. I also think that families shouldn't be too big so that it's easier to look after each family member. Peruvian women should continue to travel on this promising road that is there before them at the moment and try to overcome the little obstacles they are faced with in order to achieve what is dearest to them.