After a long battle with cancer, Judith Acuña Pichilingue died on September 8th, 2020 at 81 years of age. For those using Facebook, the Catholic Mass for her was on October 8th, 2020 at 5:00 PM and is viewable on the the Amigos de la Miscordia page. 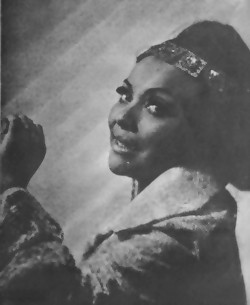 Judith Acuña, who recorded under the name Wara Wara, which is Aymara for Little Star, toured the world giving performances in many countries including the Soviet Union but she is little known outside of Peru. Hopefully this site will provide more information for her many fans around the world!

After having been a vocalist with other Peruvian groups, Wara Wara made at least three solo albums in the early to mid '60s singing Inca and other Peruvian songs, many of which were made popular in the U.S. by Yma Sumac. She was trained in technique by Moisés Vivanco, Yma Sumac's husband, and sings many of them in a similar style as Yma Sumac's versions.

Yma Sumac, known for her phenomenal vocal range and rather unusual style, was often mimicked by other performers and Wara Wara was one of the best. To be absolutely clear, however, Wara Wara's voice and style were distinctly her own. Having a voice range of four octaves and often referred to as an Yma Sumac imitator, Wara Wara was a well-trained coloratura soprano and, although her voice didn't quite have the low range that Yma Sumac possesses, she was able to imitate the low notes by using the growl to stretch her range much the same way that Yma Sumac did. The over-all effect was quite nice and sounds quite a bit like Yma Sumac's 1943 Argentina Session tracks.

In his upcoming book, Yma Sumac: The Art Behind the Legend author Nicholas Limansky said of a concert in 1974 at the Amatu Coliseum in Lima, Peru where Yma Sumac and Wara Wara shared the bill, along with other performers:

"A company of 200 dancers took part in the concert, as well as another singer from Peru who had gathered quite a following during the 1960s and 1970s. According to biographical information, her name was Judith Acuña, formerly a medical student. Professionally she went under the name of Wara Wara ["Little Star"]. She sang and recorded some of Yma's former repertoire and specialized in copying some of Yma's vocal tricks and effects. Wara Wara had coached with Moisés [Vivanco] and her recordings use a number of "his" arrangements. [Her] reception at the concert was tremendous [and she] was the first of a number of Sumac-imitators that began to appear over the years.

"Yma seemed to view all of this with a complex emotional combination of amusement, pride and anger. It certainly created an unfortunate and awkward situation for Yma who stood by and saw audiences show more interest in the copies than in the original."

I hope you enjoy this site and if you have photos or other items to share, please contact me through the contacts link in the upper menu bar.